As most know, Mike Meyer, is the worldwide educator of hand lettering. We thought it would be logical to introduce a series of brushes that he could introduce to all his students in his extensive travels. We have been working on a series of lettering quills that would work well for both the professional and the beginner. We decided on a synthetic sable hair that is like no other synthetic on the market. This synthetic is the closest thing to real sable hair without having to pay the steep sable price. In the last year the price of pure sable has increased by fifty percent and I’m not sure that the price is stable yet! The synthetic sable is unusual in the fact, that it absorbs paint like natural hair. More importantly, it flows out of the brush in a controlled manner. This brush can be used with enamel, urethane and water based paint. We hope that you find this brush to be as versatile as its intended origin.

Mike Meyer is also featured in our Pinstripers Hall of Fame: Award #113

This series is a full synthetic filament mixture.

There are no reviews yet.

Only logged in customers who have purchased this product may leave a review. 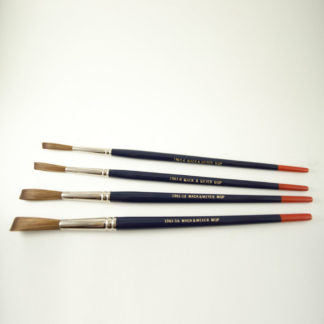